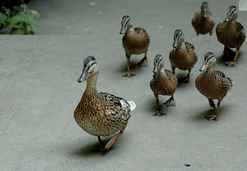 Leaders may exhibit different styles and take on different roles within a team, any of which necessarily impact on the way the team functions.

 The leader’s style. The literature on leadership classifies leadership styles in various ways. I have chosen the broad, often-used terms of autocratic, democratic and laissez-faire leaders in order to explore the possible effect of a leader’s style on a team. (a) My observation would be that leaders who behave autocratically often drive strong results and their teams would be considered high-performing in that sense. An interesting phenomenon, however, is when the leader is absent and the degree to which the team ‘mice will play’; thus demonstrating the dependence the team has on the autocratic leader, not to mention the possible resentment or frustration felt. (b) Leaders who behave democratically are more likely to draw on the views of the team and to share the decision-making. Processes may take longer and be less clear-cut; however, this is in the belief that it is worth the higher levels of commitment and participation that result. This approach is my preference. (c) Laissez-faire leaders adopt a hands-off approach, allowing the team to take the shape that it will and to function as best it can. Where there are strong team members, the vacuum may well be filled and the team operate effectively, but with no thanks to the leader. Leadership is, of course, situational and not always easy to categorise, so there may be elements of these various styles which leaders will call on – although that must always be with due integrity and good purpose.

 The leader’s role in the team. There are multiple roles which leaders may adopt within a team. They may be out the front, driving the agenda and taking full carriage for the tasks to be undertaken, with the team following their directions. They may be in the middle of the team orchestrating affairs but interacting with all the players. They may be fully integrated into the team, playing an equal role in accordance with a more distributed approach. They may be outside the team, looking in and playing more of a monitoring role. A leader with responsibility for multiple teams could be playing all of these roles, depending on the particular team; its purpose, needs or stage of development. Once again, the response will be situational and the leader responds accordingly, but in a way that is consistent with the appropriate style.

The way in which a team is led will have a significant impact on the performance of the team. There is an adage in sport that the most talented players do not necessarily make the best team; that a ‘champion team beats a team of champions’. It is the leader’s responsibility to help every member to be the best s/he can be. There may be individual strengths and weaknesses but the collective impact is where the power lies and the leader needs to be equipped and ready to help release that potential.

(Excerpt taken from some current writing on the experience of leadership)