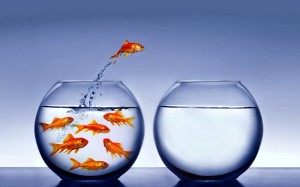 The notion of success or failure seems to me a rather stark and simplistic way to view many endeavours. The term ‘failure’ has such uncompromising connotations, as if there were no redeeming features, when usually there will be shades of grey, or even myriad colours. Similarly, ‘success’ seems to connote one thing rather than many – the ultimate achievement of a goal and an end-point, when in truth, there have been a great variety of outcomes and no end-point.

Innovation may be at any one time both successful and unsuccessful. The viewer’s perspective, the stage of the innovation, a particular aspect, the longer-term impact of some or all of the innovation; any of these might determine perceived effectiveness.

In the same way that inquiry learning encourages students to experiment and generate multiple possibilities and to construct learning, so it is in the world of innovation. There is unlikely to be one true and irrefutable ‘right’ answer. The endeavour is to keep seeking and inquiring.

Having said that, the point of innovation is to improve and so ultimately to be successful in that sense is the expected outcome. As Bob Dylan writes in his dichotomous verse, ‘…failure is no success at all’, and so those driving the change will continue to review constantly and to find the most appropriate solutions.

In terms of achieving successful outcomes, innovators can encounter two impediments which stem specifically from the human element and from others’ perceptions of the change and their conceptions of success and failure. On the one hand, there may be inertia which could be the consequence of the lack of either recognition of or interest in the need for change. Perhaps too, people just do not have the time or space. On the other hand, there may be resistance (Rothberg, 1998) which is a more active and intentional response and possibly the more challenging of the two to manage.

(Excerpt from some writing on the leadership of innovation)